Real World Claim Stories Tough environmental disasters, chemical explosions and other catastrophic events can be easier to endure with the right insurance coverage from a world-class organization. Pollution officials this month began rolling out a new set of rules requiring property owners to test for and address vapors before transferring property….Read More

The Many Disasters Behind the West Virginia Chemical Disaster

When 10,000 gallons of industrial chemicals leak out of a tank built in the 1930s, one mile upriver from a treatment plant that supplies water to hundreds of thousands of people, it may be time for regulators to ask themselves some unpleasant questions….. Read More »

Sinkhole the size of 20 football pitches opens up in Louisiana…

Amid fears it could burst into flames as it fills up with GAS. Community forced to move out as natural gas builds up. Texas Brine being sued after collapsed salt mine created sink hole. Read More »

After “bizarre” chemical explosions Tuesday at a Santa Paula wastewater treatment site, mandatory evacuations remain in place, 37 people have been treated, and firefighters and the plant’s owner are bewildered. Read More »

Virgin Islands Resort Illness: Family Slowly Recovering
A Delaware family became sick – perhaps from pesticide exposure, federal officials say — during a trip to the U.S. Virgin Islands.  A father, his teenage sons and the teens’ mother fell ill in March  2015 in St. John, where they were renting a villa at a resort.  The U.S. Environmental Protection Agency said that the presence of a pesticide at the rented villa in St. John may have caused the illnesses, which were reported to the EPA on March 20. Read More »

Fracking Chemicals Detected in Pennsylvania Drinking Water Publication Date May 4, 2015 in New York Times
An analysis of drinking water sampled from three homes in Bradford County, Pa., revealed traces of a compound commonly found in Marcellus Shale drilling fluids, according to a study published on Monday. The paper, published in the Proceedings of the National Academy of Sciences, addresses a longstanding question about potential risks to underground drinking water from the drilling technique known as hydraulic fracturing, or fracking. The authors suggested a chain of events by which the drilling chemical ended up in a homeowner’s water supply. Read More »

Oil Tank Car Fire Forces Evacuation of North Dakota Town Publication Date May 5, 2015 in New York Times
A train carrying highly volatile crude oil derailed and erupted into flames on Wednesday morning, forcing the evacuation of a small town in North Dakota, according to local and federal officials.  It was at least the sixth oil train accident in North America this year, and like several of those previous accidents, it involved a newer generation of tank cars that were built to be more durable. And it occurred less than a week after the federal government outlined its plans to improve the safety of hazardous train traffic, including the durability of tank cars.  The BNSF-operated train derailed near Heimdal, about 100 miles northeast of Bismarck, resulting in a large fire that involved six tank cars, according to the railroad. There were no injuries. The cars involved in the crash were all built after 2011 and have more safety features than earlier types, according to BNSF. Similar tank cars, known as CPC-1232s, have exploded in other accidents this year, including the derailment of a CSX-operated train in Fayette County, W.Va., and that of another BNSF-operated train in northern Illinois. Read More »

Oil spill cleanup accelerates on Santa Barbara County coast Publication Date May 21, 2015 in Los Angeles Times
Crews are working around the clock to clean up the site of an oil spill in Santa Barbara County that has sent tens of thousands of crude into the Pacific Ocean and left even more saturating the soil.  Read More »

Stormwater Runoff Exposure Article
This is a must read for those of you who want to learn more about the environmental exposure to your property and others, regarding storm-water runoff. Read More » 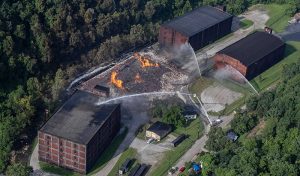 One Dead After Underground Tank Explodes at New York Gas Station
September 2019 – Authorities are investigating an explosion in an underground tank at a New York gas station that killed a worker.  State police say the explosion happened at a station in the town of Dickinson in Broome County.  Police say a 50+year-old man was cleaning the tank when it exploded, killing him.  The federal Occupational Safety and Health Administration is investigating the death. 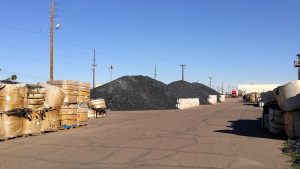 Some CRT glass disposal sites are no longer certified to the R2 standard and has seen multi-state certifications suspended.  Read More

The scenarios featured above are real-life cases from public news sources and offered only as examples of possible environmental insurance claims.